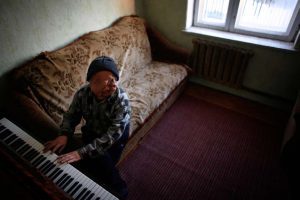 SEMEY, KAZAKHSTAN – NOVEMBER 19
Berik Syzdykov, 29, sings and plays piano in an apartment in Semey, Kazakhstan Nov. 19, 2008. Berik was born deformed and blind as one of the million victims of radiation from Soviet nuclear testing. He learned to play piano and fell in love with opera when he travelled to Italy for an operation on his face. During the Cold War the Semipalatinsk Nuclear Polygon covering 18,500 square kilometers on the steppe of northeast Kazakhstan, was the site of a secret Soviet nuclear testing programme. Through four decades until the early nineties, the Soviet Union test detonated over four hundred nuclear weapons in the atmosphere and underground in preparation for a war with the West that never took place. The locals were used as guinea pigs to test the effects of radiation on human populations. Villagers living close by were given virtually no protection or warning of the dangers of radiation. Doctor Nailya Chaizhunusova from the Institute of Radiation Medicine in Kazakhstan recounts that “the army experimented on civilians – they would move people close to the test sites, leave a hundred people in the village, give a test group 200 grams of vodka to drink and monitor their health after they detonated a nuclear weapon.” During the course of the nuclear programme, the military prohibited doctors from attributing the sharp rise in illnesses and deaths from cancer, leukaemia, and radiation exposure in the region to the nuclear tests. (Ed Ou/Reportage by Getty Images)

Tweets by @RyersonRJRC
Back to top button
Close
Close