By ALLISON RIDGWAY
Special to the RJRC 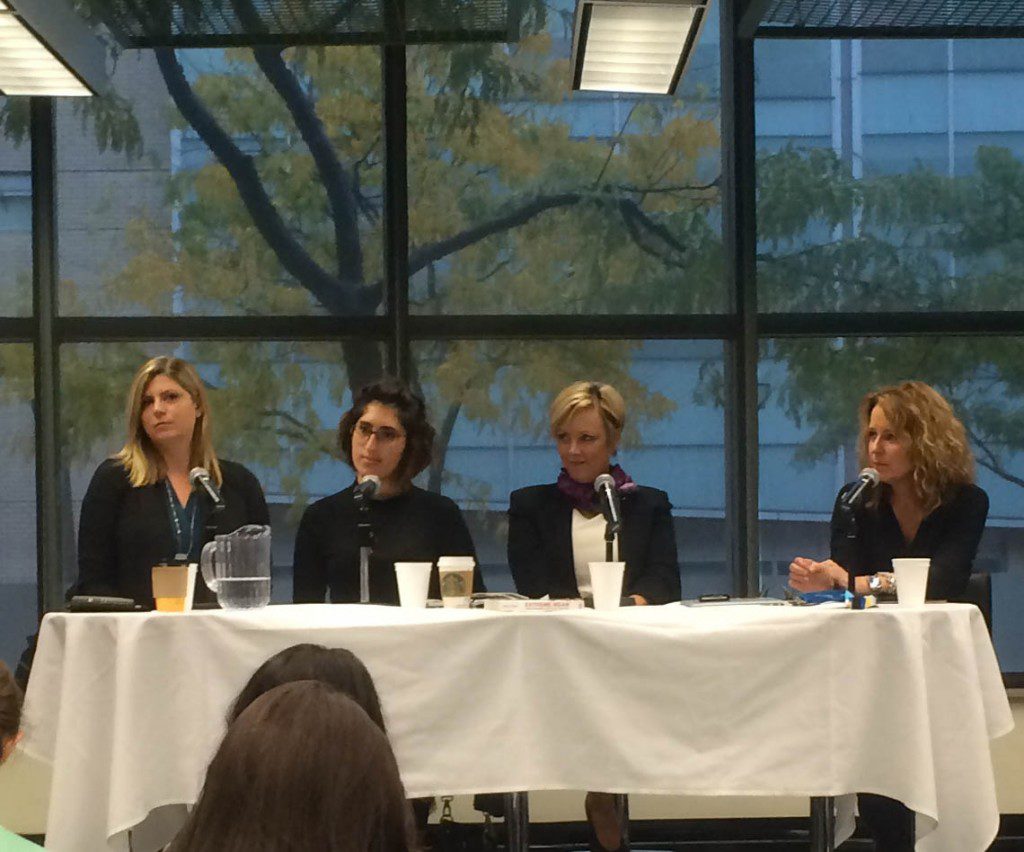 The harassment of reporters online and during live television hits can have personal consequences for women in the field and affect their careers, veterans of the troll wars said during a panel discussion hosted by the Ryerson Journalism Research Centre.

Harassment – both online and off – most often targets female journalists and raises concerns about their safety on the job, author and journalist Paula Todd told a room packed with journalism students during the Oct. 28 event. This in turn, she warned, may make producers hesitant about sending women out to do live broadcasts at all.

“Imagine if you’ve worked hard to get this position [as a reporter],” Todd said, “and now someone is trying to prevent you from doing your job.”

Fellow panelist and CityNews reporter Shauna Hunt knows all too well how harassment interferes with her ability to do her job. Since it was popularized by several online videos in 2014, she and other women journalists across North America have had the phrase “f**k her right in the p***y” (known by the acronym FHRITP) yelled at them by passersby while they are trying to film live hits.

Hunt said she has been interrupted by children, men in business suits and drivers who roll down their windows to shout the obscenity as they pass by. Reporters at her station, she said, have tried to cope by using noise cancellation equipment and repositioning the camera in quieter areas where there are fewer people. In the latter case, filming away from the crowd is at odds with the whole point of doing a live hit, which is to be in the middle of the action.

“The anxiety level used to be very high,” Hunt said. “We’d say in the newsroom, ‘I just don’t want to do [this story]’ because we knew we’d go out there and be harassed.”

Hunt’s decision to confront men who interrupted her when she was covering Toronto FC’s home opener in May went viral after CityNews aired the footage. The video now has more than 5,400,000 views on YouTube.

The publicity, Hunt said, seems to have discouraged copycats: “I’m not being harassed the way I was before this story went viral,” she said. “I used to be fearful, but the anxiety happens a lot less now.”

Interrupting women while they are doing their jobs is not a harmless prank as some have argued, said Todd, whose book, Extreme Mean: Ending Cyberabuse at Work, School and Home, examines why people – often men – choose to demean, stalk and threaten others.

“FHRITP is an attack against female journalists,” she explained. “It’s an incitement to violence against women. They are being told that a part of their body is going to be violated…it’s all about denigrating women.”

Harassment, whether it is online or in the field, is not free speech, Todd said, noting that in fact it can stifle free speech by silencing women’s voices and making people afraid.

“I got harassed a lot,” Shafi, a 2015 Ryerson journalism graduate, told the audience, “Like, all the time, on a constant basis.”

Shafi often writes about social justice issues and controversial topics and she says this draws the ire of those who don’t like her challenging the status quo. Instead of simply disagreeing with her opinions, she said she gets “hundreds” of messages from online trolls hurling insults, slurs and threats.

In her first year as a journalist, the online harassment worsened to the point where Shafi said she began to question why she’d ever gone into the field. Eventually, though, it was her love of writing that brought her back onto the Internet.

“I realized that I couldn’t suppress the urge to write something,” Shafi explained. “I just had to get my two cents out there.”

While she said she doesn’t respond to trolls and just blocks them, she does get screenshots of their tweets, posts and messages and shares them on Twitter as proof of what she deals with.

“Always make sure that when you get harassed, you talk about it, otherwise it will continue to be normalized,” Shafi said. “Don’t frame it as an exchange of opinions or a Facebook status debate. It’s not. Online harassment is violence, and we need to start acknowledging that.”

Todd offered the similar advice: “We can’t go offline,” she said. “If you surrender the Internet to people who use it for hatred, eventually the people who are trying to change the world for the better will have no voice. We need to use the Internet in even greater numbers to counter every single negative, racist, sexist and other-ist comment out there.”